Multiple sclerosis (MS) is a neurological condition affecting the central nervous system. ‘Sclerosis’ means the scarring or hardening of tiny patches of tissue; it is called multiple sclerosis because it happens in more than one place in the brain and/or spinal cord. 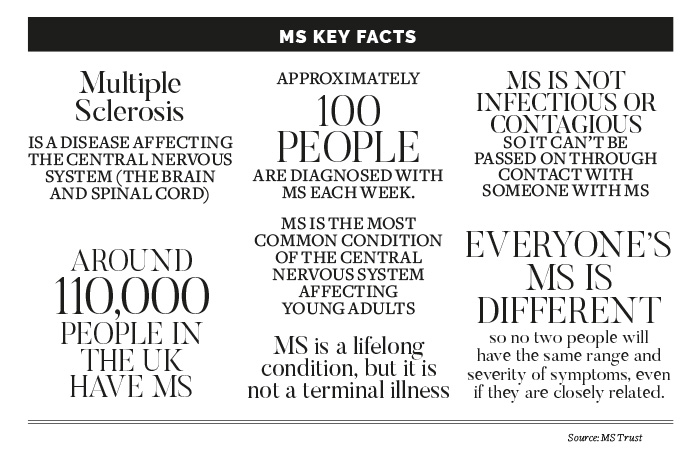 Relapsing remitting MS is the most common form of the condition, with around 85% of people receiving this diagnosis. It means that symptoms can fluctuate from aggressive flare-ups to mild relapses, to periods of good health or complete recovery.
Relapses can vary in frequency, severity and time between attacks, making it difficult to predict. It is quite common for people to have one or two attacks a year and the level of recovery may not be the same with each attack. Disease modifying drugs (DMDs) may decrease the number and impact of relapses (see below)

Finally, there is primary progressive MS, which is less commonly called chronic progressive MS. Progressive means that disability increases from the beginning and it can be rare to have any relapses. However, some people may have times of improvement or times when symptoms remain steady. 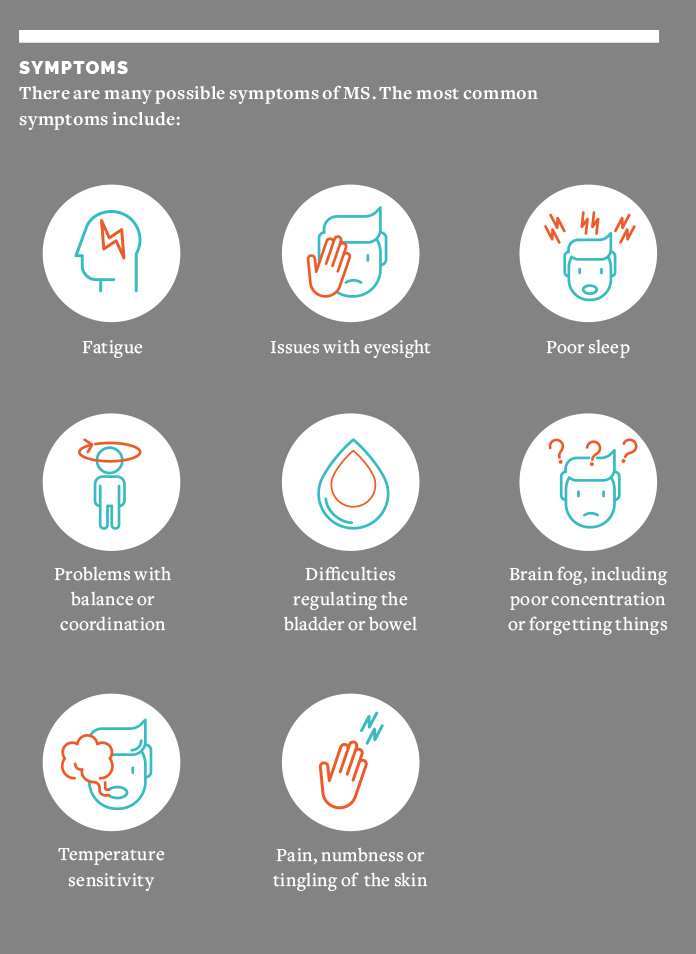 In the last fifteen years, the drug options for treating relapsing remitting MS have gone from almost nothing to an array of choice.

The first available medications, injectable interferons, have now been joined by pills and infusions, with generics now also entering the market. There are currently 14 different DMDs for relapsing remitting multiple sclerosis.

However, the UK has one of the lowest uptakes of DMDs in Europe, and there is considerable variation in prescribing practice across the UK.

To address this, the MS Trust has developed a tool to make it easier for people with relapsing remitting MS to explore their options and be better informed about treatments. The tool has several key features:

• Regularly updated to reflect new guidelines from National Institute for Health and Care Excellence, the Association of British Neurologists and research findings

• Users can select up to three drugs at a time and compare efficacy, mode of action, side effects and monitoring requirements.

Choosing the best treatment for you. Jane shares her experience of making a decision about treatment.

My name is Jane, I’m 25 years old and I live in Scotland. I work as a nurse within the community. One of my passions from a young age has been sport, in particular netball, which I love to play.

Only six weeks after handing in my nursing dissertation I was diagnosed with MS. This was following a period of double vision that occurred very suddenly, and an MRI. I was subsequently transferred over to the care of a neurologist specialising in MS. Around this time, I was also introduced to the most excellent MS specialist nurse, Mhairi.

“My advice to anyone wanting to switch his or her DMD is, only try and fix a cog if it is broken!”

Around six months post-diagnosis I started on my first DMD. In discussion with my nurse Mhairi and using the MS Trust’s MS Decisions resource, I was able to make the most informed decision regarding treatment choice. Initially I commenced on Tecfidera, due to its efficacy rate, balanced with non-invasive delivery and because it was in simple daily tablet form. This worked well to begin with, but I then began to lose weight quickly without trying so I was advised to stop.

I then chose to start on Avonex. Despite the lower efficacy than Tecfidera and being in injection form, I decided this would be best for me. I felt comfortable learning how to inject myself just once per week and Avonex had also been about for some time, so lots of research had been conducted; I felt it was reliable. I remained on Avonex for just over a year, keeping very good health, working four days a week and playing netball weekly.

Unfortunately, in May 2017 I had quite a major relapse, which was triggered by a severe migraine. On having a further MRI, it was confirmed my MS had significantly progressed. At this point my neurologist advised me that I should begin a second line MS DMD treatment. He advised me to look at three drugs, but one was automatically disregarded due to a pre-existing health condition I have. My choices were alemtuzumab (Lemtrata), which is administered as an in-patient in hospital via an intravenous infusion in two treatment courses, 12 months apart, and natalizumab (Tysabri) an intravenous infusion administered once every four weeks. I had many factors to weigh up including possible side effects from both treatments.

I opted to have alemtuzumab. As I write this, I am two weeks post second round of alemtuzumab. This has not been an easy journey and it took me many months until I regained any sort of normal life after my first infusion, which I failed to prepare for mentally. I did eventually recover and was able to return to work. Now I have had my second infusion I am focusing on recuperation and I cannot wait to get back on the netball court.

My advice to anyone wanting to switch his or her DMD is, only try and fix a cog if it is broken! If your DMD is working for you, don’t switch, but if you relapse or side effects become problematic, consult your MS nurse and access the MS Decisions resource from the MS Trust. You can then weigh up your options and decide what is personally best for you.

With thanks to the MS Trust. Go to www.mstrust.org.uk