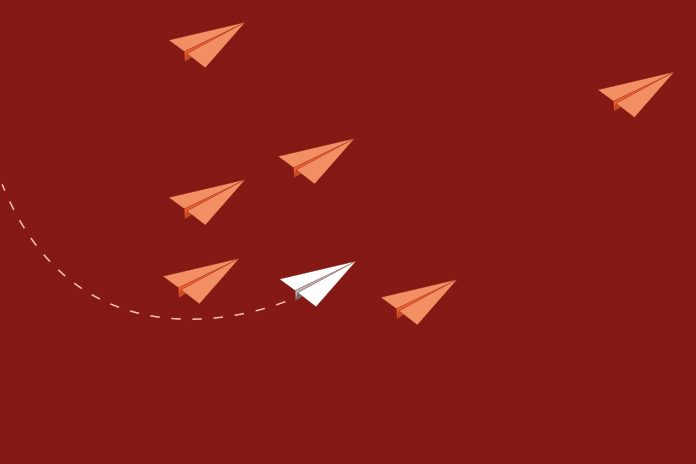 2018 was a significant year for biosimilars. October’s patent expiry of adalimumab, the world’s top selling prescription medicine, saw a raft of biosimilars launch, and the NHS issue new guidance for commissioners on switching to biosimilars if they are cheaper than the originator.

Biosimilar medicines, equivalent biological products which have no meaningful differences from the original or reference product in terms of quality, safety or efficacy, are playing an important role in providing choice for clinicians and increasing access for patients by driving down cost to the NHS.

Warwick Smith, Director General of the British Biosimilars Association (BBA) explains: “Biological medicines are protein-based and made or derived from living organisms. Unlike traditional chemical equivalents they can be tailor-made, so they bind to specific targets
in the body and treat serious or chronic diseases. A biosimilar medicine is manufactured to be highly similar to an existing licensed ‘reference’ biological medicine after expiry of its patent.

“Biological medicines have dominated global lists of the best-selling prescription drugs. Very successful treatments for rheumatoid arthritis and autoimmune diseases have led the way and, as the industry moves forward, other disease areas such as oncology are increasingly coming to the fore in new biosimilar medicines.”

Even before adalimumab’s high-profile patent expiry, spending on biosimilars was rising. Sang-Jin Pak, Chief Operating Officer of Samsung Bioepis, says: “Biological medicines accounted for six of the world’s best-selling drugs in 2017, and their share of healthcare
spending has been rising sharply.

“This gives biosimilars a role in helping to make healthcare systems more sustainable.”

Smith observes that the UK has grown into a market leader in biosimilars relatively quickly. “It was only a few years ago that the UK was struggling to keep pace when it came to adoption of biosimilar medicines. A lack of clinical awareness was a significant factor in lower comparative uptake to other European countries. However, in a relatively short space of time the UK has gone from lagging to leading and collaboration has been an important aspect in the turnaround.”

Paul Clark, Director of Biosimilars at Napp Pharmaceuticals Ltd, agrees that the rise of biosimilars has been rapid in the UK market, saying that this has a lot to do with them providing other, more sustainable, possibilities: “We have come a long way since the first introduction of a biosimilar to the UK. Biosimilars provide important alternative treatment options that have been proven to provide the same level of efficacy as their originators, reassuring both healthcare professionals and patients that the use of biosimilars is not just a cost-cutting exercise, but a way of delivering effective outcomes to patients at a sustainable cost.”

Adoption of biosimilars is picking up pace as more come to market. Clark continues: “The NHS has made huge leaps in terms of the adoption of biosimilars and the cost-saving potential is widely recognised and implemented. As we see more entrants into the UK biosimilars market, strong competition, coupled with leadership from within the NHS, will help to continue to drive down the costs of these medicines.”

Smith adds that savings could be significant: “There have been a number of drivers for this uptake including their cost effectiveness against originators. For example, the expiry of the adalimumab patent in October 2018 is expected to make the single biggest contribution to the NHS’ objective of saving £200 million to £300 million per year by 2021 through the uptake of biosimilar medicines,” he says. UK healthcare budgets are stretched by ageing populations, and technology investment and advances mean that diseases can be detected earlier and treated later. “Affordability and value are key elements of widening patient access. So, as biological medicines have played a more significant role in providing life-saving and life-enhancing treatments, greater uptake of biosimilar medicines is critical, and this is an area where the UK will see increasing benefits over the next few years.” 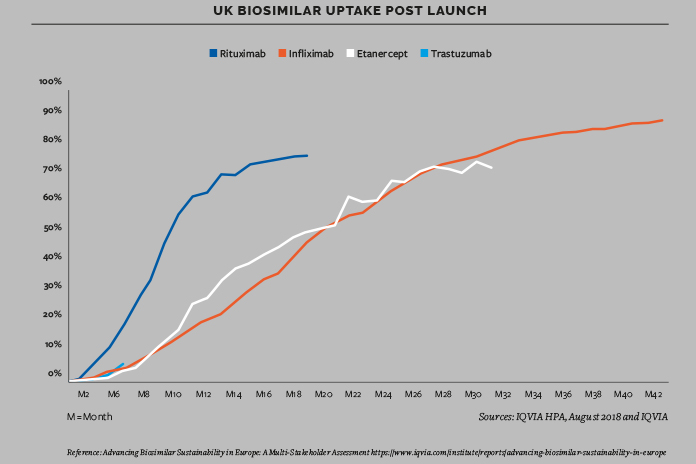 To support adoption of biosimilars, new commissioning guidance and approaches are being developed.“We are seeing a change in approach from commissioners both in terms of more directive guidance around uptake expectations, and in how the NHS sets out procurement to encourage active market participation from multiple manufacturers,” says Clark.

NHS England’s guidance for commissioners on biosimilars, to support their uptake across the NHS, includes a focus on cost-effectiveness. “[The guidance] suggests that it should be normal for new patients to be treated with biosimilars – if they are less costly than the originator, which they normally are – and that clinicians should consider switching existing patients from the originator to a biosimilar,” Smith explains. “This kind of guidance and sharing of best practice has been key to driving further uptake across the regions of the UK. The NHS is also about to publish the second iteration of its ‘What is a biosimilar?’ document aimed at increasing clinical and patient awareness.”

Uptake also relies on collaboration, highlighting the importance of good relationships between commissioners and medical professionals. “Collaboration between stakeholders is really important and we have seen the most effective uptake in the UK where commissioners and medical professionals work together to implement biosimilars and share the resulting savings across their respective institutions,” Smith says.

However, there are likely to be challenges as more biosimilars head to market, as Clark explains: “There are potential commissioning challenges when we look ahead to certain biosimilar opportunities that will hit the UK market over the next few years. Several products that never gained full access because of value considerations will now potentially be available at lower cost.

“Commissioners along with health technology assessment bodies may have to reassess how the UK currently uses these medicines.”

In addition, there’s still a level of restriction in the UK and beyond. “Unfortunately, the use of many biosimilars has been restricted compared to other countries, including within Europe. This means that many patients are still unable to access cost-saving biosimilars,” says Clark.

A key example is in rheumatoid arthritis, where patients with less severe disease activity are potentially missing out on medicines that may improve their quality of life.

“There remains an ongoing challenge, particularly in the biosimilars marketplace, to strike the right balance between affordability for the NHS and incentivising innovation in this space. Our hope is that by evolving and expanding the biosimilars offering and patient access to these medicines that we find an equilibrium to support sustainability,” Clark adds.

This is echoed by Angela McFarlane, Market Development Director UK and Ireland at IQVIA. She explains that the biosimilar market needs sustainability and ‘race to the bottom’ pricing will not create competition in the market.

Using adalimumab as an example, McFarlane explains: “NHS England recognises sustainability has become an issue. As part of its procurement process,
it accepted bids from five manufacturers and put in place a national framework agreement for the supply of adalimumab in the NHS.

“Previous frameworks for biosimilars have included all brands on an unranked framework. Consequently, trusts have tended to switch to the lowest-cost biologic for financial reasons, but other companies have struggled to gain market share.

“This new approach means that no one supplier of adalimumab could be awarded the whole market and it provided a strong incentive for suppliers to offer their best price at the point of tender. This meant competitive suppliers gained a greater share of the market.” She is clear that biosimilar uptake needs to be based on PREP – Pricing, Regulatory, Engagement and Policy (see below). 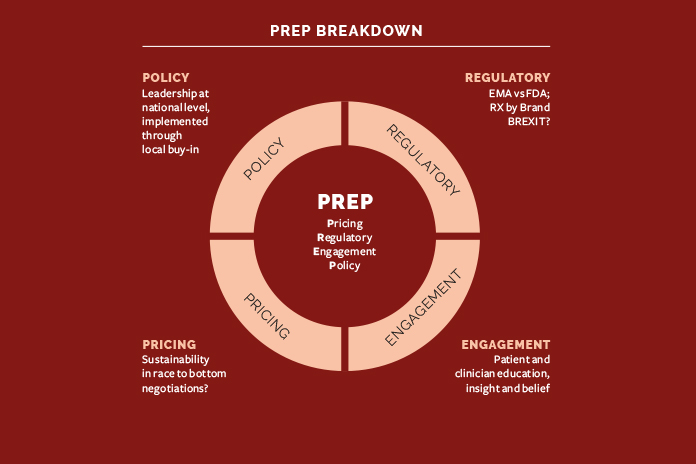 What do biosimilars mean for the industry?

Biosimilars have evoked a variety of responses in the industry with different organisations taking their own routes and facing their own challenges. Clark explains: “Every company’s approach to the rise of biosimilars will be dependent on their own portfolio and priorities for the future.

For some this has spurred on the development of biosimilars, for others it
has been challenging to see patents expire and lead to their loss of market share.
“For Napp, biosimilars have been an important part of our business for many years. We believe biosimilars provide value beyond price, helping the NHS deliver high-quality, sustainable healthcare.”

Smith adds: “NHS England has brought together the full range of stakeholders to understand why biosimilar medicines should be routinely adopted, and why switching from the originator is a perfectly natural thing to do, that is underpinned by the regulatory science and now increasing real world evidence.”

What’s the future for biosimilars?

It’s clear that biosimilars are here to stay but what does the future look like? Demand will increase as Jean-Yves Brault, Country Manager at Mylan UK, explains: “Biologics have already brought a step change with their innovations improving patient outcomes. Matching the quality, safety and efficacy of the originator products, biosimilars have the potential to support not just the health of the nation, but with thanks to price reductions, the long-term health of the NHS. Since 2006, the European Union’s largest five economies have already seen a level of savings through biosimilars that could fund more than 40,000 nurses annually in those countries. This is just the beginning. Biosimilars are here to stay.”

Smith says that competition is key to sustainable success: “Via competition, biosimilars will continue to create savings which allow stretched budgets to be more efficiently spent and crucially increase patient access to these vital treatments.

“It is particularly important that the rapid introduction and take-up of the opportunities from new biosimilar medicines is maintained and consistent across the NHS. To help achieve that, biosimilars have featured as a priority on the NHS’s Regional Medicines Optimisation Committees (RMOCs).

The main purpose of the four RMOCs of NHS England is working together as a single system to avoid unnecessary variations in the best use of medicines.”

According to Smith, 2018 was a “critical and successful year” in terms of the development and maturity of biosimilars market in the UK, but maintaining the momentum is crucial. “It is important that…the learnings and real-world experience are taken forward as more
patents expire and new disease areas come on stream.

“There are challenges from factors such as Brexit and what future regulation looks like, but the UK is now in a position where it is delivering on the promise of biosimilars which is great for patients and payors alike.”