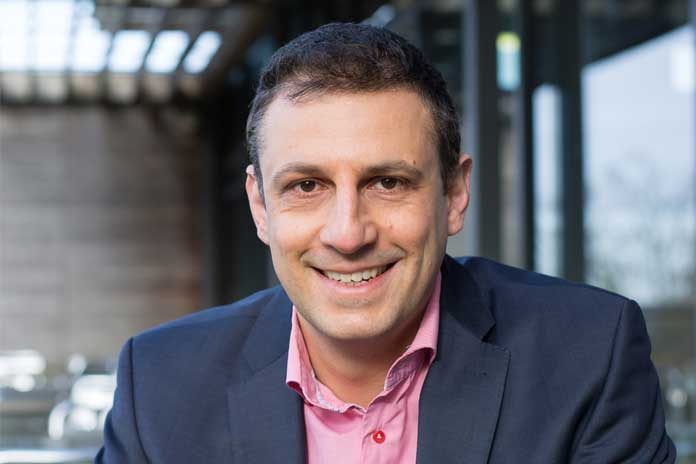 Mark Samuels is on a mission to get medicines to patients and start dynamic friendships.

There’s a lot of talk in this business about ‘putting the patient first’, but my guest today backs it up by repeatedly putting his neck on the line, to prove he’s doing just that. Chief Business and Strategy Officer at Medicines Discovery Catapult, Mark Samuels, doesn’t like a simple existence and prefers climbing seemingly insurmountable obstacles – metaphorically and literally. Let’s find out why.

What is the brilliantly-named Medicines Discovery Catapult?

The purpose of the Catapult is to support the life sciences sector and, in particular, small to medium-sized enterprises (SMEs) at the early stage of research. Many of these will be biotech companies, diagnostic companies or spin-outs from university. People throw the word ‘exciting’ about a lot in healthcare, but this really is. From a blank sheet of paper, we are now rapidly building and delivering the Catapult’s programmes of work.

In what ways can you help these guys?

We’ve got some very rare scientific kit which, if you were a small company with a highly promising molecule, you wouldn’t otherwise have access to. For instance, we’ve got the UK’s only solid state nuclear magnetic resonance facility, which is vital for drug target validation. Furthermore, we’ve got a vast breadth of expertise, and often this know-how is as important as lab capabilities. By the end of this year, we aim to have over 100 staff, made up of world-class people with commercial, scientific and informatics experience. They don’t just talk about it, they’ve done it for real.

What other ways are there of supercharging the med pathway?

We’re driving collaborations, which combine capabilities from all the different organisations involved. Drug discovery in the UK can seem very fragmented – lots of brilliant teaching hospitals, universities and patient charities doing great work, but it isn’t always obvious to an SME how to bring them together.

What do patient charities bring to the mix?

Many of them are huge powerhouses in their own right, and they know precisely what a patient needs. This is an area where drug discovery can be strengthened, because eventually people in industry will need to submit patient reported outcomes, so it’s better to trigger that process from the start.

How do you get people who are protective of their discoveries to share information?

I pioneered some of the most complex collaborations in clinical research, when I led the establishment of the Government’s translational research collaborations. These are very large-scale consortia, each involving up to 36 different universities and NHS Trusts, working as one team with industry. So, you can imagine the challenges involved in getting all of them to work together.

What great things happen when they break bread?

Those partnerships have been running for years now and been responsible for many successful projects, including a trial of the first new drug in 50 years for chronic cough and the world’s largest clinical trial for preventing rheumatoid arthritis. I instigated the ongoing HIV collaboration between Oxford, Cambridge and London biomedical research centres, which is currently undertaking a first in-human trial for a cure. Even against all odds, collaboration can happen as a force for good.

In the vast healthcare landscape, where does the Catapult sit among NICE, the NHS and so on?

As a broker and neutral convener. We’re funded by Innovate UK and, therefore, not-for-profit and here to benefit the UK. I probably have an unusual breadth of insight into UK life sciences; for example, I represented the UK’s diagnostic industry in co-chairing the establishment of NICE’s programme to evaluate diagnostics. I also know what the industry’s position on submissions is, from my time on the strategy board of the NHS’ research arm. At the Catapult, we’ve certainly got a wide range of perspectives we can bring together.

Did you always plan for a career in life sciences?

I studied molecular biology for my first degree, then went to work for Unilever and spent many years in fast-moving consumer goods in the UK, Holland and France. I had a great time and at one point in my career, worked on marketing for Star Wars – a dream job!

I definitely come from a different background – I was a serious mountaineer in my 20s and 30s, and took six months off to climb the Alps and Andes. I was on a mountain called Aconcagua, when I ran out of money and realised it was time to get a job. It was sheer serendipity that, while I was there, I bumped into another couple of climbers who happened to be recruitment consultants for the life sciences sector.

On top of a mountain? Come on, Mark, I wasn’t born yesterday!

It’s absolutely true. They introduced me to Roche, and that’s how I came into the industry in 2001. I started in a marketing role and eventually become head of business development for Roche’s diagnostics division. After a decade, I left Roche for a role in Government, where I set up the National Institute for Health Research’s Office for Clinical Research Infrastructure, driving collaboration in the research centres it funded. It was such a big task that many of my respected colleagues told me not to take the job.

How did it pan out?

It had all the challenges of a start-up. At the beginning, we had four members of staff and were operating out of a coffee shop, and yet we were representing the Government, so had all the bureaucracy that comes with that. Within five minutes of starting, Pfizer had announced it was closing Sandwich – but I actually enjoy difficult situations, and things soon improved. We started forming a lot of allies very quickly and built partnerships with many of the foremost scientific leaders in the country. When I started in 2009-10, £30m was coming in through industry investment, and by 2014-15 it was up to £130m.

What are your major ambitions for the Catapult in the future?

Patient-centred collaborations, and starting with the patient need. After all, we are all patients, and we all need this to work.

What record would you choose for the soundtrack of your life?

Naturally. It’s your last supper, what are you having?