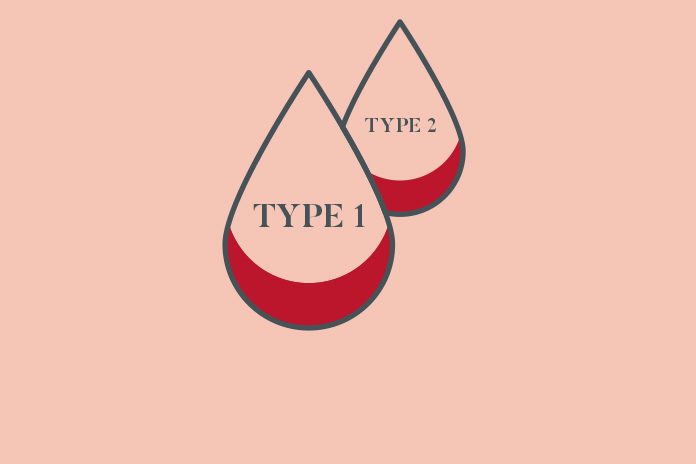 Diabetes is a serious health condition and there are two main types: Type 1 and Type 2. How do they differ and what treatments are available?

There are two main types of diabetes: Type 1 and Type 2. Although both relate to high blood glucose levels, they are different conditions. There are also a number of rarer types.

As a result of the body not being able to produce enough insulin, people with Type 1 diabetes need to take insulin regularly by injections or through a pump.

According to Juvenile Diabetes Research Foundation Ltd (JDRF), the reasons why the immune system attacks and destroys beta cells are unknown, yet around 330,000 people in the UK have Type 1 diabetes and over 29,000 of them are children. JDRF says that incidences of Type 1 diabetes are increasing by 4% each year and particularly in children under five, where there has been a 5% increase each year over the last 20 years. Around 90% of people with Type 1 diabetes have no family history of the condition.

Unlike Type 1 diabetes where the body’s immune system attacks the insulin producing cells, in Type 2 diabetes the body does produce insulin but not enough, or the insulin it produces does not work properly. This creates a cycle where the insulin doesn’t work properly so the pancreas tries to produce more, and glucose levels continue to rise.

NHS.UK says that a person is at more risk of developing Type 2 diabetes if they are over 40, or 25 for south Asian people; have a close relative with diabetes – such as a parent, brother or sister; are overweight or obese; or are of south Asian, Chinese, African Caribbean or black African origin – even if they were born in the UK.

Beyond Types 1 and 2, there are other, less common types of diabetes.

Needing to urinate more often is a key symptom as the body tries to remove the glucose via the urinary system. Other symptoms include excessive thirst, tiredness, weight loss, and frequent bouts of thrush. Symptoms can also show themselves as blurred vision, delays in cuts healing, or increased appetite.

Both Type 1 and Type 2 diabetes are diagnosed with blood tests to check blood sugar levels.

If blood sugars get too high, a person may have hyperglycaemia or a hyper. Like the initial symptoms of diabetes, hypers can be characterised by needing to urinate more frequently, excessive thirst, tiredness and headaches.

Some treatments for diabetes such as insulin can drop blood glucose levels too low. If someone has particularly low blood sugar, they may have hypoglycaemia, or hypos. Symptoms can vary, however, they are typically characterised by feeling shaky or sweaty, having a fast pulse, going pale, feeling anxious, irritable or emotional, being hungry, having blurred vision, a lack of concentration, tiredness or headaches.

In 2017, following campaigning by Diabetes UK in partnership with people living with diabetes, NHS England announced a £44 million Diabetes Transformation Fund to drive improvements in diabetes treatments and care for people with Type 1 and Type 2. The treatment and care programme built on the prevention work which was already underway.

The ‘Healthier You: NHS Diabetes Prevention Programme’ is a joint commitment between NHS England, Public Health England and Diabetes UK. It focuses on people at high risk of developing Type 2 diabetes and refers them to a behaviour change programme, including education on healthy eating and lifestyle, help to lose weight and bespoke physical exercise programmes. NHS England says that five million people in England are at high risk of developing Type 2 diabetes and Type 2 diabetes treatment already accounts for just under 9% of the annual NHS budget, around £8.8 billion a year.

Most of the spending is on complications which can be reduced by improved treatment and care for people with Type 1 and Type 2 diabetes. Further funding and commitments on Type 2 diabetes prevention and diabetes care and treatment were made part of the NHS Long Term Plan.

People with Type 1 diabetes need to inject themselves with insulin or use an insulin pump to control their blood glucose levels. There are different types of insulin: long-acting or fast-acting. As the names suggest, long-acting insulin keeps working for a long period of time, meaning it can work overnight or throughout the day. By contrast, fast-acting insulin is taken just before the person eats. It helps to control blood sugars so they don’t spike (increase rapidly) around mealtimes.

People with Type 2 diabetes may also require insulin, however, lifestyle changes such as healthy eating and exercise, coupled with drugs to help lower blood sugar levels if necessary, are usually the first line in controlling the condition.

Some people with diabetes need to monitor their blood glucose levels to check when they need to take their medication. This can be undertaken by a finger prick test and a blood testing meter and may be completed first thing in the morning, before or after meals depending on the type of diabetes.

Not managing high blood glucose correctly can lead to people experiencing serious health complications such as problems with their sight or feet. In extreme cases, people may go blind or require an amputation. This is due to a build-up of sugar in the blood which impedes the flow of blood around the body.

There’s a third type of diabetes which not many people know about. Here’s Graham’s story.

Graham’s twin brother was diagnosed with Type 1 diabetes at the age of 15. Two decades later, in 1999, Graham was wrongly diagnosed with Type 2. Four years after that, he was told that he might have a third type of diabetes: LADA (Latent Autoimmune Diabetes of Adulthood) or Type 1.5.

“When my twin brother was diagnosed none of us knew what diabetes was or its impact or knew anyone who suffered from the condition. He had to go straight into hospital and I remember being really scared for him. Being twins, we were really close.

“Through exercise, diet and medication my blood sugar control is great, and I feel fit and healthy”

His regular hypos seemed to control his life. Back in those days there was no human synthetic insulin; it was pig’s insulin that kept him alive. Before each meal, he would draw up the insulin from a vial into a heavy metal and glass syringe which had to be cleaned before every injection.

His diabetes affected us all. It was hard on my mum, she had a steep learning curve, what he could and could not eat, the weighing out of all his food and new low sugar and carb recipes to manage his condition. We didn’t always get it right of course, but as a family we gradually learned to adapt to our new routine.

Not long after my brother’s diagnosis, we were contacted by Kings Hospital in Denmark Hill. They were interested in undertaking tests on us to help with their research. Having one twin with diabetes and one without was gold dust for medical research.

We took almost annual trips to hospitals in London for tests. But as the years went by, the odds were in my favour, I was no more likely to develop the condition than the general population.

So it came as a bit of a surprise when during a regular check-up the doctor bluntly told me I had Type 2 diabetes. I was prescribed gliclazide and a controlled diet.

Four years after my diagnosis, Barts Hospital got in touch to say that they thought I may have a new type of diabetes that hadn’t been previously identified; LADA, unofficially known as type 1.5.

LADA is difficult to identify as there isn’t as much information about it and there isn’t really a test for it beyond being diagnosed with diabetes. The medication is very much ‘try it and see what works’ rather than anything more empirical. My medication must be regularly reviewed.

Currently I control my sugar levels through a combination of long acting insulin (Tresiba) and a small amount of short acting insulin (Nova Rapid) with my meals. I take the same dosage every day and only change this following consultation with my doctor.

Overall I feel very lucky. Through exercise, diet and medication my blood sugar control is great, and I feel fit and healthy. I still enjoy riding my bike and competitive cycling and can honestly say I don’t feel diabetes stops me doing anything in my life.”

With thanks to Diabetes UK. Go to www.diabetes.org.uk