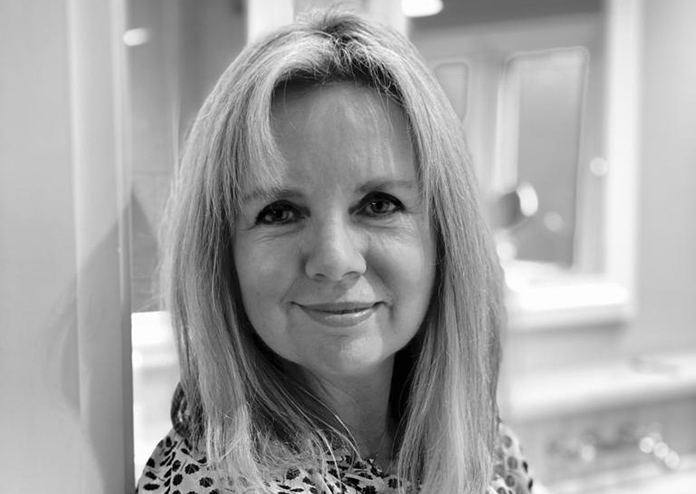 In support of World Neuroendocrine Cancer Day, Kate Quirk shares her story of living with lung neuroendocrine cancer and how she is using her experience to help others.

My whole life changed in 2003, with a diagnosis of what was called back then, a Typical Lung Carcinoid.

The run up to my diagnosis was pretty textbook. For the past three or four years, I’d suffered from repeated chest infections and wheezing, and then one Christmas, I contracted pneumonia. I was also being treated for asthma but not responding to inhalers. Eventually, I coughed up blood and my GP sent me for a bronchoscopy.

Six weeks later, I had a lower left lobectomy to remove a 2cm tumour from my brochus. I was followed up for five years with chest x-rays, then discharged as no evidence of disease (NED). Medicine now knows X-rays are not the correct modality to follow-up what is now known as lung neuroendocrine cancer.

It took me a long time to get over the surgery. Back in 1998, I’d also had a total hysterectomy for endometriosis, and the aftermath of both surgeries absolutely floored me.

Over the next few years, I went back and forth to my GP, complaining mostly of fatigue and what felt like hormonal imbalance.

In 2009, fatigue began to be a real issue, accompanied by intermittent bloating and flushing, so my GP adjusted my HRT. In 2010, with weight loss and right-sided upper abdominal pain, my GP sent me for a CT scan. But it was reported as ‘all clear’. In 2012, I found a swollen lymph node in my neck. My GP sent me for an ultrasound and I was told to ‘keep an eye on it’.

In 2013, I was back again, convinced the neck node had grown and feeling very fatigued with the addition of rather alarming palpitations for which there seemed no obvious explanation. So, we adjusted my HRT again.

During all of this, I continued to work, raise my family, travel with my husband’s job and have a full social life. I got used to resting when I could and just got on with it all.

Then, in December 2015, a routine mammogram picked up what was thought to be a breast cancer. Two breast lumpectomies and a sentinel lymph node biopsy later, I was diagnosed with triple negative breast cancer and given a rather poor prognosis.

But the tumour wasn’t a triple negative breast cancer. It was actually a metastases from my original lung neuroendocrine cancer. But we didn’t know this at that point. I went on to have 20 breast radiotherapies, but I refused chemotherapy. During all of this, I knew something wasn’t right, I just didn’t know what.

In 2016, I began to do a lot of research. Refusing chemotherapy had set alarm bells ringing with my local oncology team and during one of the follow-ups for my breast radiotherapies, I told the nurse about my swollen neck node, which was on the right. My so-called breast cancer was on the left.

She quickly booked a FDG-PET Scan, thinking the triple negative breast cancer was spreading even faster than expected; followed by a CT abdo spine and thorax. Then a liver MRI.

I requested a second opinion and was referred to The Christie NHS Foundation Trust in Manchester. They carried out a review of my medical history and discovered that the 2010 CT scan actually showed tumours already on my liver. If they had been triple negative breast cancer, I wouldn’t be here now. They believed the tumours were lung neuroendocrine cancer metastases and sent me for a Gallium-68 Dotatate scan and a liver biopsy.

In January 2017, it was confirmed that I had extensive lung neuroendocrine cancer mets to liver, bones, pancreas, adrenal and parathyroid glands and one kidney. No wonder I’d felt tired. I’d been living with an indolent cancer for years but, like many with this disease, had no idea.

I started monthly Somatostatin Analogues and remain on them today – they’re no walk in the park and side effects include fatigue, bloating and hair shedding.

But the single biggest task my new oncology team faced was restoring my trust.

One of the cancer treatment options open to me was Cap-Tem. Another was Everolimus. I didn’t want either (who does?). But my research kept flagging up a targeted treatment called Peptide Receptor Radionuclide Therapy (PRRT) which seemed to me, a better option.

However, it wasn’t and still isn’t, approved or funded in the UK for lung neuroendocrine cancer primaries.

In the summer of 2017, I attended an NHS England conference in London with IEL, Advanced Accelerator Applications (AAA) Novartis as sponsors and met with other neuroendocrine cancer clinicians and regulators to raise the subject of access to PRRT for lung neuroendocrine cancer patients. I lobbied my oncology team at The Christie and in 2018, I met with the lead Interventional Radiologist and the Chair of the National Cancer Research Institute Neuroendocrine sub-group. They were incredibly supportive.

At this time, I was invited to be a patient representative for the PET-CT Academy at The Christie. I also sat on the patient panel for Neuroendocrine Cancer UK, helping to formulate information for newly diagnosed lung neuroendocrine cancer patients.

Thirty-two scans later, 3 cycles of PRRT, and at the time of writing, 58 Somatostatin Analogue injections, I remain stable and have a relatively good quality of life.

By comparison to triple negative breast cancer, neuroendocrine cancer seemed “like a lottery win” according to my new oncologist.

Inevitably, I feel that there is more to be done to prevent others experiencing a challenging or delayed diagnosis.

In 2019, I took part in the International Neuroendocrine Cancer Alliance (INCA) Advocacy training course. I hope to be a voice for change, to use my skills to support others and to act as a bridge between clinicians and the patients diagnosed with this often misunderstood cancer.

I believe that patients have a responsibility to educate themselves and be their own best advocates – information empowers patients to make decisions.

But if patients are unable to advocate, there should be a reliable and trustworthy resource to help them. For neuroendocrine cancer patients that resource is Neuroendocrine Cancer UK, a registered charity set up to support and inform patients and families from diagnosis (enabling access to the best care and treatment), whilst stimulating Neuroendocrine Cancer research, increasing awareness and influencing improvements in outcomes.

I now work as a Patient Support Co-ordinator for Neuroendocrine Cancer UK and, together with colleagues, run regular patient support groups, called ‘Natters.’

It’s hugely rewarding to be part of a team which works hard to support patients, lobbies policy makers and knows how to access clinical research and development information.

Above all, they encourage patients that it’s ok to have a voice. This is an area I feel is little understood as patients strive to be heard.

There are relatively straightforward things a patient can do, like requesting copies of pathology reports, scan results or blood tests, and tracking them. Few patients do this or are aware of benefits. Many remain intimated by the whole experience of dealing with clinicians and some are reticent in becoming an active part of their own care team.

Some patients may also not want to know this information, or have the desire to understand it (and like most medical terminology, it can be challenging) but a greater and supported awareness can lead to better treatment options.

There are good (productive) ways to tackle these constraints – and bad. The need for persuasive patient tenacity is hugely underestimated, and clinicians are often overwhelmed with a workload rarely appreciated by the patient. If a common ground can be found to work together to recognise this, much can be achieved.

Many patients can feel overwhelmed by the complex nature of their diagnosis. Often there is pressure from friends and family who empathise but cannot understand why (a) their loved one is unlikely to be cured, but may still live a good quality of life, and or (b) why they are not immediately on aggressive cancer treatments causing hair loss etc; and many patients are left struggling to understand what just happened. This often comes after years of feeling unwell, and of trying to find a medical explanation. Overlay this with complicated treatment options, and we have a recipe for confusion and fear.

The patient-doctor relationship must be one of mutual respect.

Doctors have been carefully trained to handle patients – I believe patients can be educated to respectfully handle doctors. No one sets out to offer a poor experience.

After all, it is only with a mutually respectful and trusting partnership that the best outcomes will occur.